London’s Nuts For Cheese has landed a deal to supply U.S. food stores with its vegan cheeses, a move that may see the business grow five-fold, said founder and chief executive Margaret Coons.

“It has been a long time coming. We have been getting requests from the U.S. for years,” to sell their cheese-like product south of the border, Coons said.

The nut cheese will be stocked at “several hundred” stores in the U.S. and it has been picked up by supplier Vegan Essentials out of Wisconsin, stores in Philadelphia and a distributor in California.

“We are working with natural food distributors. It is such a growing category.”

Last year, Nuts for Cheese sold about 250,000 wedges, or units, of its nut cheese. By the end of this year it forecasts selling about 100,000 wedges a month.

“It’s crazy here right now,” said Coons. “I feel very lucky, a little overwhelmed, but I would not have it any other way.”

The business has added more equipment to automate production including new packaging and a machine to cut the product into wedges. It employs 25 and may add about five more jobs this summer.

In 2019, Nuts for Cheese was located in an 1,000 square metre space but took over adjacent vacant unit in its Pacific Court commercial plaza and now has 1,800 sq. m, but likely will add another 500 sq. m soon.

“Vegan has become mainstream for sure. A lot of people want to eat better or have dietary sensitivity. There is increased demand,” said Coons.

Topping off her banner year, the fifth year Nuts for Cheese has been in business, it received official fair trade certification.

Nuts for Cheese products are sold in 1,500 stores across Canada, up from about 600 stores a year earlier.

The company sells several flavours and styles of nut cheese at local grocery stores, including artichoke and herb, brie, cheddar, blue and a red rind version. It has added a black garlic flavour to its lineup, with a charcoal and porcini mushroom rind, said Coons.

Its new non-dairy spreads are offered in two flavours, salted and herb and garlic. 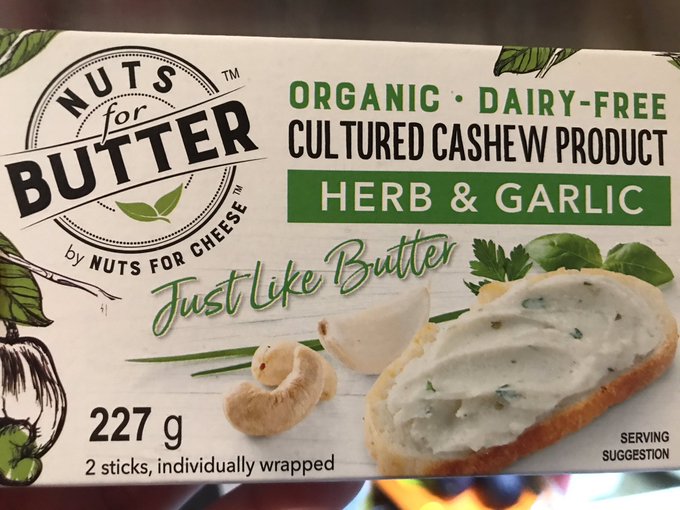 “My vision has been to create a lot of vegan foods and there are alternative butter products on the market, but they have not been very high quality you can bake with. I am a foodie, I love to cook and make mother sauces and pastries.”

With fermented cashews, coconut oil and sunflower oil among its ingredients, giving it a “creamy and rich” quality, the non-dairy butter can be used as a substitute for real butter in a one-for-one ratio, she said.

“It is like a double-churned, artisan butter,” said Coons.

The growth of Nuts for Cheese exemplifies the strength of the London food sector, which has seen significant growth recently with expansion of Dr. Oetker, Nestle and the landing of a new Maple Leaf Foods plant, said Norm Beal, executive director of Food and Beverage Ontario.

“Plant-based proteins are at the forefront of growth in the food sector now and I am not surprised by this. There is a lot of opportunity for them,” said Beal of vegan food processors.

“London is really growing as a major food hub. Hats off to London for recognizing the food sector is a major economic driver.”

The food sector has seen stability and some growth through the COVID-19 pandemic, just as it was stable through the 2008 and 2009 recession, he said.

“Ontario is a leader in the food and beverage sector and London has embraced that.”

Food research points to meat substitute sales in Canada climbing from $120 million US in 2015 to $226 million by 2022, according to the website Statista.com.

That site also states there are 2.3 million vegetarians in Canada and 850,000 vegans.

“More and more people are identifying as vegan and there are many factors for that,” including animal welfare concerns and health awareness, said Sebastien Martel, executive director of the Vegan Society of Canada.

“Traditional, animal-based proteins are being replaced.”