Tool is for transparency, not to redesign each street in Hamilton, says city director 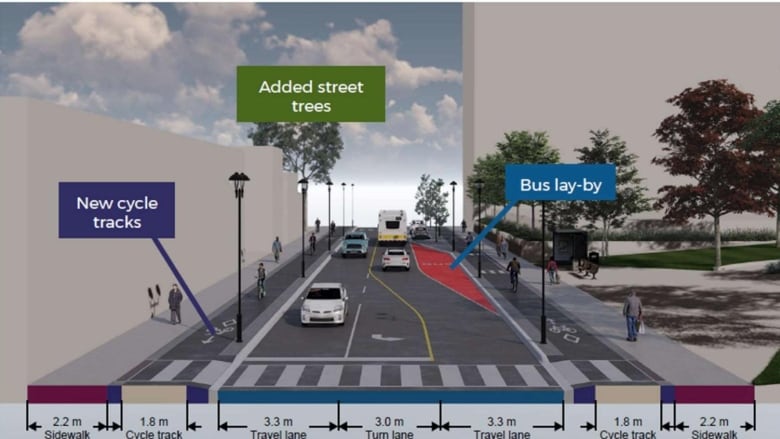 The city is developing a new tool to help designers better plan out roadways in Hamilton that take into account all users and make streets safer.

In a public works committee meeting on mon, Ward 3 Coun. Nrider Nann said the work was critical, especially in light of recent crashes involving pedestrians in the city.

“I’m really looking forward to the time when we as a public works committee meet without having to reference yet another pedestrian death on our roadways,” she said.

Police say an 80-year-old man was hit while crossing “without the right of way” at Main Street East and Tisdale Street South crosswalk on Jan. 9.

“We have a problem with our throughways throughout Ward 3 and also the lower city that lack enough safe crossing by design and by historically preferencing the car, which leads to residents making unsafe crosses to service and amenities,” she said.

How the tool works

Johnson said the tool asks for data about the street, such as its traffic volume and road width. After you input the values, it suggests different “typographies” — types of streets — that could apply.

There are eight in total, and each comes with scores for different factors that designers should pay attention to. One is the lowest score and five is the highest, meaning it’s of utmost importance for designing that specific type of street.

Johnson explained this helps prioritize design elements. For example, for an “urban avenue,” pedestrian realms and cycling facilities are given a four. For “rural roads,” pedestrians are only scored a one.

“[The scoring] is arguably one of the most important components… as it dictates what the streets will look like and how we balance those competing priorities,” she said.

A further assessment of the street is done to evaluate future considerations and aspects like green infrastructure. The tool reviews the result and says whether a street is “balanced.”

Ward 5 Coun. Collins raised concern about the city’s capacity to pay for potential changes and whether the format would mean “locking into some kind of system.”

Brian Hollingworth, director of transportation, planning and parking said the intent isn’t to find a project for every street, but to bring transparency to the planning process.

It makes a recommendation that isn’t based on people’s opinions, he said, though he noted input from the public is still involved with projects.

“This guideline is not intended to suggest that every street must be converted to a complete street immediately. We will work through opportunities as they arise.”

He also explained that while some changes would be low cost to achieve balance, others — like landscaping — would be significant.

Ward 2 Coun. Jason Farr asked about the potential for a “wack-a-mole” effect, where one street is fixed to be more balanced, but the others around it want changes too.

“Cities don’t evolve overnight. So it is going to take some time, but we have to start somewhere,”

City council endorsed the latest transportation master plan in 2018. It directed staff to create the complete streets design manual, and Johnson said the final version is expected to be presented to council in the fall.

Staff will consult with the public on the core elements of the design, including those street typologies and the tool, and will develop a plan to implement the guide.

A public facing website is expected to launch later this month.