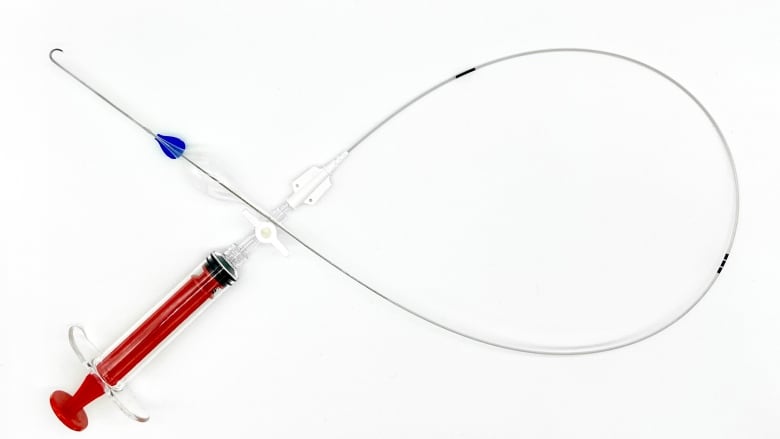 Pictured above is the COBRA-OS device. That stands for Control Of Bleeding, Resuscitation, Arterial Occlusion System. It’s been designed as a tool that’s small and easy to use, one that first responders can employ at the scene to manage severe internal bleeding. (Front Line Medical Technologies)

In emergency situations, time is of the essence. And a new tool from a Canadian company could help first responders quickly control severe internal bleeding at the scene and save more lives.

The COBRA-OS is a device developed by London, Ont.-based Front Line Medical Technologies that helps health care workers manage a patient’s blood loss from traumatic injuries, and it only takes about a minute to set up.

Power said that upwards of 90 per cent of patients who have severe internal bleeding die before making it to the hospital.

“There’s a whole group of patients out there who are dying, and not even our best medical care is saving right now,” he said. “For trauma, [severe internal bleeding] is the number one cause of death.”

Speed matters, because the longer it takes to set up a device and begin care, the more likely it is that a patient will die.

“In a situation where someone is bleeding out, you want to be able to control that as quickly as possible,” said Dr. Asha Parekh, biomedical engineer and company co-founder. “There’s a benefit to both the patient and the user, if it’s less technically-challenging to do.”

Parekh and Power have been working on the tool for three years, which they say is smaller and more simple to use than conventional models. The kit consists of the device, a syringe and a mini-access kit, among other features, that can fit into a box the size of a small laptop.

Health Canada approval big step in getting tool onto scene

Last month, the COBRA-OS received Health Canada approval as a product that manages blood loss through a procedure called REBOA, or Resuscitative Endovascular Balloon Occlusion of the Aorta.

It’s a procedure that doctors use to manage blood loss by inserting a small inflatable balloon attached to a wire into the femoral artery, the main supplier of blood to the leg.

The balloon is pushed up the artery into the aorta in the chest, where it acts as an internal tourniquet, turning off the tap to the lower half of the body.

This temporary blockage makes sure blood goes to the heart and brain, buying first responders as much as 30 minutes of time to get a patient to further care.

Power and Parekh designed it with first-responders in mind who could use it to treat soldiers on the battlefield or patients at the scene. In some parts of the world, the REBOA treatment is already being used in pre-hospital settings, but right now, it’s mostly being used by physicians in the emergency department.

The company is also testing the device to see how it treats non-traumatic cardiac arrest.